Home / About Us / Cemeteries 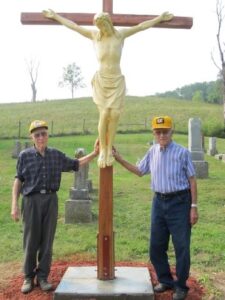 St. Anthony’s Cemetery can be seen on a hill just before arriving in China on highway 62.St. Anthony’s Catholic Church, founded in 1849, was folded into the Prince of Peace Parish in Madison in 1993. The church building was acquired by a Catholic organization that conducts masses and holds retreats there.

The St. Anthony’s cemetery came under the responsibility of Prince of Peace Catholic church in 2012. A book on St. Anthony’s Church was written by Elma Schafer and can be found in the Jefferson County Historical Society.

St. Joseph’s Cemetery, according to a St. Mary’s Parish History published in 1915, St. Joseph’s cemetery was laid out in 1867 at the north end of Walnut Street at the bottom of Hatcher Hill. St. Mary’s Catholic Parish was folded into Prince of Peace Parish in Madison in 1991. This cemetery was known as the “German Yard” in the late 1800s. 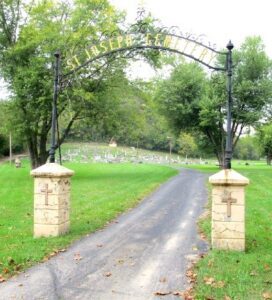 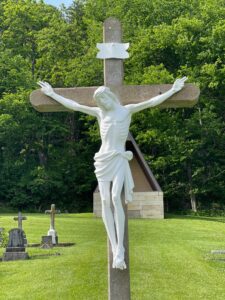 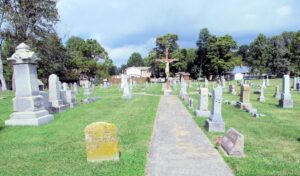 St. Magdalen Cemetery can be seen just north of St. Patrick’s Chapel on Madison’s hilltop.
The old St Magdalen Church out on the Jefferson Proving Ground stood where early graves were located. The ground was leveled, and a large cross was placed where the old cemetery was located. The cross still stands in the Big Oaks National Wild Life Refuge in memory of those buried there. This first St. Magdalen cemetery was started in Ripley County in the 1840’s. Catherine Heck, Wife of Nicholas was the first buried in the new Cemetery on April 5, 1865. A new church was built in 1861in St. Magdalen Parish of German immigrants. This Church building was closed in 1941 when the Army took over the land. The Parish moved to New Marion and purchased an old bank building. The Parish flourished there until 2013 and then was merged with Prince of Peace Parish in Madison. The Archdiocese has managed the cemetery since 1941.
Maria Yager Rohrman sister to Peter Yager was the only grave marker moved from the “Old Cemetery” to the new one established in 1861. The Army took control of the land in 1941 and moved the cemetery next to St. Patrick’s Cemetery on State Street in Madison. St. Mary Magdalen Parish in New Marion merged into Prince of Peace in Madison effective December 1, 2013.
A book written by Barbara Jachimiak on the history of the St. Magdalen Parish history can be found in the Jefferson County Historical Society 615 West First Street, Madison.

St. Patrick’s Cemetery was purchased by Father Hyppolyte Dupontavice in 1848. According to St. Michael’s Parish History published in 1937, he administered the cemetery from St. Michael’s Church in downtown Madison. In earlier years few official burial records were kept by cemetery trustees. The records were kept by the Parish Priests and are written in Latin. Few records have been found. There are burial permits dating back to early 1900 located at the business office. In 1941 the DAR compiled a census of all the cemeteries in Jefferson County. In 2005, Janice Barnes, the Genealogy Librarian began three-year documentation of the cemetery. Ron Harmon began an Excel spreadsheet listing the folks who purchased the grave plots; work is ongoing to record who actually is buried in the plots. A map of the cemetery plots has been prepared which will help locate gravesites. This Cemetery was known as the “Irish Yard in the late 1800s. The earliest recorded grave is Caffey, John, Ireland, d. July 12, 1854.